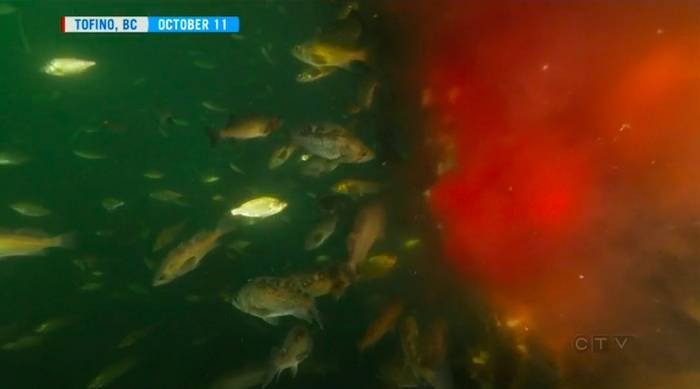 Wilderness photographer Tavish Campbell grew up on a remote BC island and has spent most of his life exploring the coastline of British Columbia above and below water. He recently dove under the Browns Bay plant near Campbell River—which processes Cermaq’s farmed salmon—and was disgusted to see a plume of blood water shooting out into wild salmon habitat. The effluent contained fish tissues, which were sent to the Atlantic Veterinary College for analysis. The samples tested positive for piscine orthoreovirus (PRV).

Creative Salmon in Tofino
Campbell then drove to Tofino to see what was happening with the effluent from the plant processing Creative Salmon’s farmed Chinook salmon.

He was able to sample and film a similar plume of bloodwater. Creative’s blood water tested positive for PRV.

It was made public during testimony at the Cohen Commission in 2012 that Dr. Kristi Miller from the Department of Fisheries and Oceans had detected PRV on two Creative Salmon farm sites. It has since been established that this is a Norwegian virus, which causes the deadly Heart and skeletal muscle inflammation disease (HSMI).

Creative pathogens perfectly adapted to transfer to wild chinook
Creative Salmon is the only large company in BC farming Pacific Chinook in open-net pens. The Norwegian pathogens in Creative’s farmed chinook salmon are now perfectly adapted to transfer to local wild fish. Wild Chinook in Clayoquot Sound are in serious decline—is this the smoking gun? The last thing wild fish need is a foreign virus being introduced which is already adapted to the local gene pool.

It will be dangerously easy for the viruses from Creative’s operations to spread to wild salmon populations. There are 20 salmon farms located in the Clayoquot Sound UNESCO Biosphere Reserve (Creative has 6; Cermaq has 14). Because these farms are located on the wild salmon migration routes, there’s no way for wild fish to avoid these contagious farms, so no way for them to avoid picking up viruses. Wild fish must pass by the farms twice—first when out-migrating as tiny smolts, and again when the adults return to their natal stream to spawn.

DFO still not testing farmed salmon for PRV
The bigger issue here is that Creative has PRV in their effluent because there is PRV on their open-net pen salmon farms. The Department of Fisheries (DFO) continues to allow PRV-infected farmed fish to be put into BC waters. Independent biologist Alexandra Morton won a lawsuit in 2015 to stop this practice. DFO has not complied with that decision, so Morton has teamed up with Ecojustice again for a new lawsuit, which is working its way through the courts now.

The short-term solution to this blood water discharge is to turn off the tap—this discharge must be halted immediately. The longer term solution is to remove salmon farms from the pristine waters of the Clayoquot Sound UNESCO Biosphere Reserve, and the whole BC coast.

Please sign the petition started by our friends at SumOfUs.

Find us on Social Media: